Slow down and pay attention in the rain

It appears that someone wasn't watching the road. 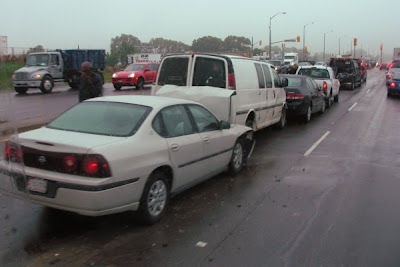 The guy in the white car had enough inertia to the van and the black car into the pick up truck. 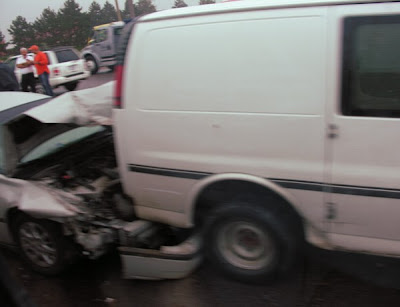 Ironically, I was sitting at this same stop light right about where the white pick up truck is when a car rolled forward into me prompting my earlier post "Fender Bender, Hertz don't it" 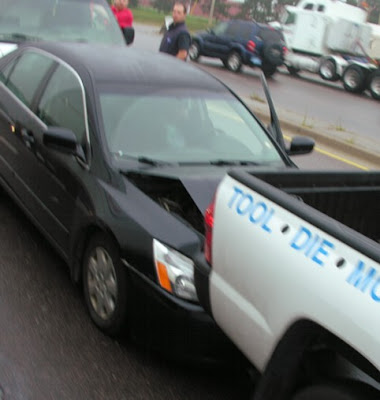 More on road safety at http://www.ezee.ca
Forklift Safety at liftright.net
See Truck photos or my other photos at donssite.com
Check out optical illusions or web animations
Posted by Donssite at 7:21 PM 3 comments:

Five people ejected from an SUV - One Dies 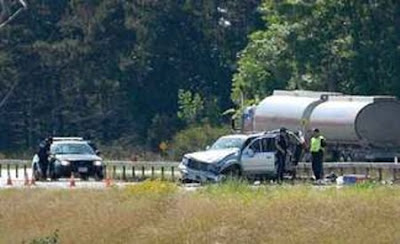 Once again a serious accident where no occupants were wearing their seat belts and all five were ejected on Highway 400.

OPP investigators speculate that the SUV may have been cut off by another vehicle.

Seatbelts Save Lives. Use them, It's the law for a reason.

More on road safety at http://www.ezee.ca
Forklift Safety at liftright.net
Or see my photos at donssite.com
Posted by Donssite at 8:31 PM 4 comments: 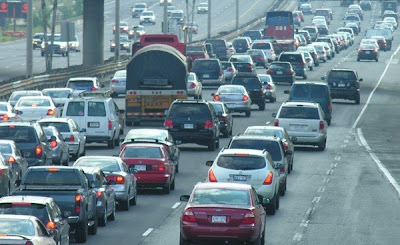 Just a couple of days after writing about "Gators" on the road and other road debris, I saw a serious problem instantly develop on my drive into the city this morning.

A large rolled tarp fell off a truck in a center lane at 60 mph in heavy traffic.

A car right behind the truck had no choice but to run over it likely causing considerable damage as I could see the front wheel leave the ground.

The tarp immediately started opening and cars started swerving all over the highway. In my mirror I could see one car fly across three lanes onto the shoulder and back into traffic.

I don't know what eventually happened but it had to scare the hell out of many drivers.

As I always say, Leave Lots of Space Between Vehicles - AT LEAST TWO FULL SECONDS , I prefer three seconds because you never know what might happen in front of you and I like going home every night.

Another point of today's post is to Truckers - SECURE YOUR LOAD ! ! !

The overwhelming majority of truck drivers are safe professional drivers with an enormous number of accident free ticket free miles, many even reaching a million safe miles and beyond.

BUT . . . there are a handful of trucks that you don't want to be around whether the driver is unsafe, or the truck or load are unsafe.

Over the years I have seen many truck loads shift (fortunately not mine) and the majority have been because the load was not secured properly in the first place.

A good reference for cargo securement is:

More on road safety at http://www.ezee.ca
Forklift Safety at liftright.net
Or see my photos at donssite.com
Posted by Donssite at 4:59 PM 2 comments:

woman parallelized from the neck down. It was referred to as a Nascar-like crash by the media.

Witnesses reported a second car which Police have already impounded. The two cars may have touched causing the accident.

Ontario passed a tough street racing law for speeding more that 50 kilometers (30 miles) over the limit in September of last year and have laid over 7500 charges so far.

More on road safety at http://www.ezee.ca
Forklift Safety at liftright.net
Or see my photos at donssite.com
Posted by Donssite at 8:48 PM 7 comments:

Look out for the Gators

Look out for the "gators" on the road, they're everywhere.

A "Gator" is a slang term for a piece of tire tread that has ripped loose from a damaged truck tire.

Smaller gators are not a tremendous hazard if you run over them but the larger ones can cause some problems. 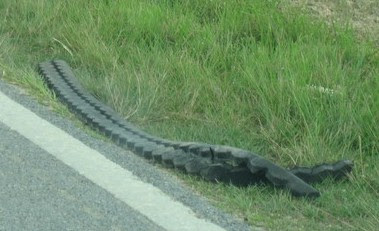 Perhaps a bigger hazard is a vehicle that swerves to miss one, that's what I saw today which luckily did not cause the accident that it could have caused.

On a busy major highway just ahead of me today, one car drove over a gator at sixty miles an hour and it flipped up in front of the car behind him. That driver freaked out, swerved to miss it and almost lost control in front of lots of traffic including me.

Any kind of debris on the road can be dangerous, I once watched (seemingly in slow motion) as a large bolt was flung up by a passing pick up truck changing lanes in front of me. The bolt was spinning in the air at my eye level as I hit it at 50 mph. My windshield shattered in circular area about a foot around with a perfect clear Hex shape in the center where the head hit. It sounded like a gun shot as the safety glass did it's job and kept it from penetrating through the glass.

I felt the instinctive urge to swerve but kept the wheel firm and ducked instead. If I had swerved enough to miss it, I would have clipped the car beside me or worse.

Just another reason to leave plenty of space between vehicles on the highway, you can see any hazards further ahead of you and take safe evasive actions to avoid hitting the debris.

More on road safety at http://www.ezee.ca
Forklift Safety at liftright.net
Or see my photos at donssite.com
Posted by Donssite at 6:33 PM 1 comment: 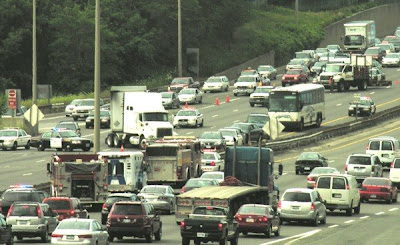 Two days after a 5 hour closure just a quarter mile west of this accident (previous post) another closure for several hours to clean up this mess then the next day, CLOSURE YET AGAIN for several hours, but this time it's the west bounders turn.

Highway accidents can be very serious and occur very suddenly when traffic is traveling at speed. 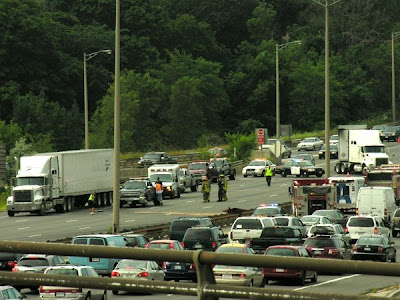 It's so important to keep a safe distance between vehicles, but I still see so many "packs" of vehicles maybe six or eight at a time driving at 75 miles an hour just a car length apart.

I still remember quite vividly while driving home one night in the rain seeing a car in my mirror coming up quickly from behind in heavy traffic changing lanes erratically. He lost control right behind me and spun out in front of a pack of cars, it was like a good break when you play eight ball.

All I could do was watch in my mirror as cars were going every which way, spinning into each other, into the wall and into the ditch. I quickly took the upcoming exit as I called 911 and doubled back on the service road to beside the accident scene. Luckily although there were many cars involved (probably about ten) there were no serious impacts although there were some seriously hot tempers.

This accident may have only involved three or four cars if traffic was spaced a little farther apart where each car had a little more safety space.

More on road safety at http://www.ezee.ca
Forklift Safety at liftright.net
Or see my photos at donssite.com
Posted by Donssite at 4:40 PM 6 comments:

Let's use HYDROGEN for fuel, save gasoline for lawn mowers. 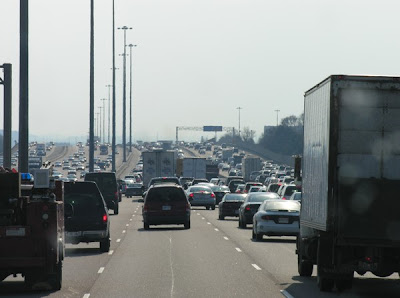 It's time to switch over to hydrogen for transportation fuel.

Remember Way back in 1975 or so (if you were around) when the big Energy Crisis hit and gas stations had huge line ups and sometimes restrictions of five or ten dollars per visit or with the added restriction of using license plate to allow odd or even days you could purchase gas.

I remember back then seeing a few articles about using hydrogen as a fuel where water was the only natural resource required and steam was the only polution it produced.

Is it the cost of production?

Is it the cost of establishing an international infrastructure to supply the demand that would develop?

Is it the cost of developing engines and fuel storage technology?

Was it Exxon or Imperial that just announced their last quarter only produced 11 billion dollars in profit?

Pretty good motive for qwashing any hydrogen technology if you ask me.

Information on road safety at http://www.ezee.ca
Forklift Safety at liftright.net
Or see my photos at donssite.com
Posted by Donssite at 12:23 PM 6 comments: