Too much carnage on the roads

There is far too much carnage on the roads, Just this last week a number of people were killed in various types of accidents. 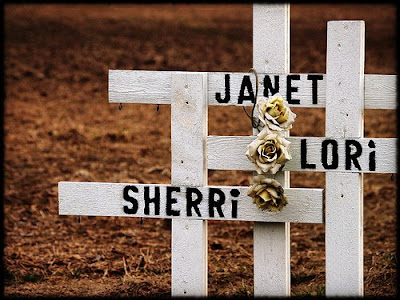 But this week, it's close to home, a relative was hit and killed while walking home last Saturday night.

20 year old Jeffrey Wide was struck from behind by an SUV and died at the scene.

The details still have not been released but the devastation to the family and his many friends has been done. 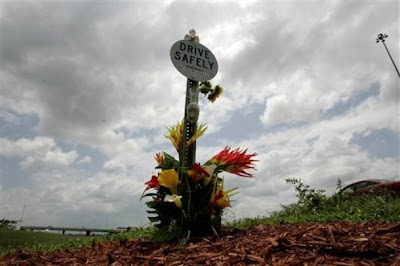 We've all seen the roadside memorials, unfortunately far too many.

It's so tragic that a small mistake, momentary lapse of attention or driver distraction can cause a fatal accident in the blink of an eye. 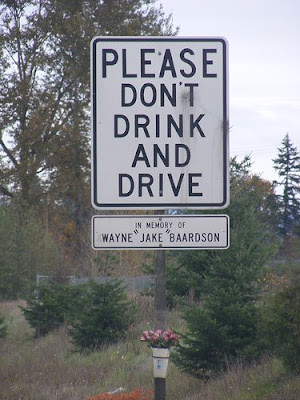 EVERYONE MUST drive like their life depends on it, because their life and lives of loved ones DO! 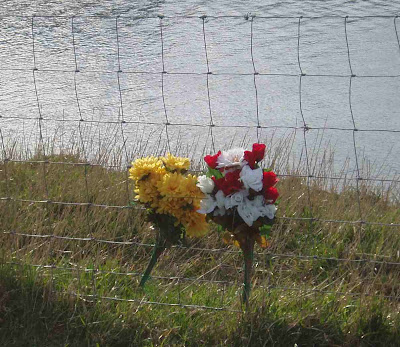 More on road safety at http://www.ezee.ca
Forklift Safety at liftright.net
See Truck photos or my other photos at donssite.com
and my photo blog or see optical illusions, web animations or my Smoke Tree
You can listen to Pete Harris too
Posted by Donssite at 1:15 PM 8 comments: 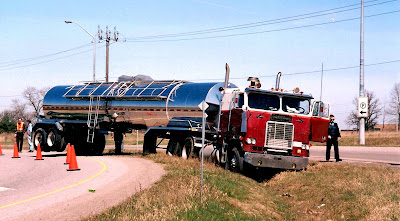 Tankers may have baffles and different compartments to help stabilize their liquid load but just like loads shifting in an earlier post cargo that is in motion will tend to remain in motion.

If the driver makes an emergency move, the liquid may slosh about in the tank causing the driver to momentarily or totally lose control of the vehicle.

In the case of a tanker exiting a highway, if a car slowed quickly in front of this truck and he hit his breaks too quickly, half a second later the truck will lunge forward from the inertia of the liquid as it surges forward in tanks. If the truck is turning at a speed as on an exit ramp, that inertia could try to keep the truck going straight, and in this case it was straight into the ditch.

Whatever the cause, I suspect this driver may have been exiting a little too fast for the curve he was in.

Need I mention to leave lots of room for trucks especially if they are carrying gasoline and never brake hard in front of a truck, he may not be able to stop.


More on road safety at http://www.ezee.ca
Forklift Safety at liftright.net
See Truck photos or my other photos at donssite.com
and my photo blog or see optical illusions, web animations or my Smoke Tree
You can listen to Pete Harris too
Posted by Donssite at 12:07 AM No comments: