Cell phones and gadgets in the car 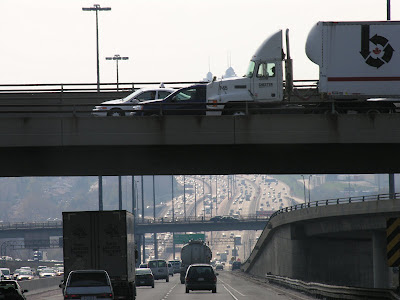 I spend a lot of time on busy highways all day and I'm seeing more and more driver distractions develop.

From my car, I see what everyone sees, lots of drivers talking on cell phones, some drivers eating or drinking, maybe putting on makeup or fixing hair.

From the truck though, I can see that drivers aren't just reading the newspaper and eating cereal, they are absorbed in their Blackberrys or trying to "text" on a cell phone or type into their laptop while they drive.

Between adjusting the music, talking on the phone, dealing with kids in the back seat or a thousand other distractions, it's amazing that there aren't many more accidents on the roads and highways.

More on road safety at http://www.ezee.ca
Forklift Safety at liftright.net
Or see my photos at donssite.com
Posted by Donssite at 6:58 PM 4 comments:

A couple of weeks ago I heard someones life change forever.

Early on a rainy morning I walked outside to take out the trash and I heard two thuds that sounded like hitting a metal trash can with a baseball bat.

I walked out to the road but I couldn't see anything and traffic was moving by normally so I went back in the house.

Then a couple of minutes later I heard a siren, I rushed out and saw a Police car arriving to join a fire truck and ambulance a block down the street.

I started walking down the street then saw that the stop light in the southern median was on the ground in the middle of the intersection.

A bystander said the driver was in pretty rough shape which was understandable after looking at the accident scene.

The really unfortunate thing is that it keeps happening.

I've seen the stop light in front of my house taken out three times in the last two years and twice they rolled over after hitting median curb. (Above)

More on road safety at http://www.ezee.ca
Forklift Safety at liftright.net
Or see my photos at donssite.com
Posted by Donssite at 11:53 PM 3 comments: